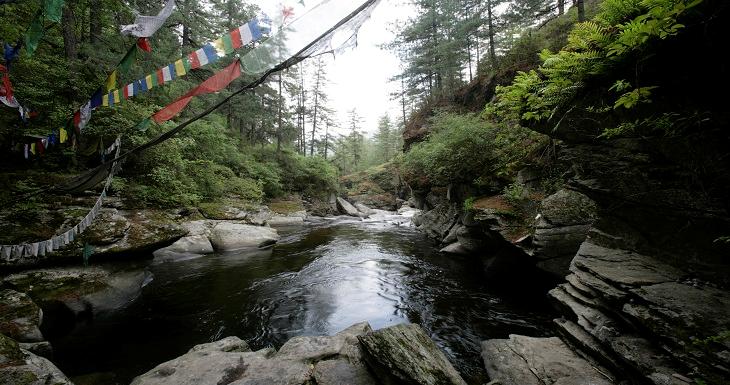 According to legend Terton Pema Lingpa had a vision of the sacred treasures that Guru Rimpoche had hidden within the lake centuries earlier. However, the people of Tang and the local ruler were cynical of his claims. In order to prove his claims, Pema Lingpa held a butter lamp in his hand as he jumped into the lake. After remaining under water for a long time he re-emerged holding a chest and a scroll of paper with the butter lamp held in his hand still burning bright. Thereafter, the lake came to be known as Mebartsho (the burning Lake).

The Burning Lake, Mebar Tsho is located along the way to the Tang village over the feeder road under Bumthang valley. It takes approximately thirty minutes’ drive to the Mebar Tsho from Chamkhar town.

Mebar Tsho is considered one of the most sacred sites in the region as it is related to the renowned religious treasurer (Terton) Terton Pema Lingpa. Pema Lingpa is considered an incarnated disciple of Padmasambhava who discovered treasure within the lake in late 15th century.

Today, this small fresh water lake is a sacred pilgrimage site for the Bhutanese with bright multicolored prayer flags surrounding it and a small altar dedicated to Terton Pema Lingpa has also been set up. On auspicious days people offer butter lamps at the lake. Many tourists visit the site to observe spectacular beauty of this important historical and religious site.